I tumble for you Jeff Jackson, a young Democratic NC State senator is the only senator in the general assembly today due to the snow.

He’s got my vote.

evaryont
reply
Best part is that lobbyists were so scared of all the pretend-legislation that they actually started calling him. If only this actually could've happened, I would've moved to NC immediately.
Phoenix, AZ 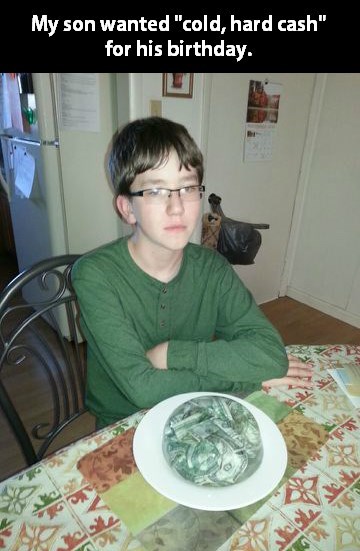 Submitted by: (via mackie11)

What a cool present.

jscartergilson
reply
You deserved that one, kid.

cartoonMike
Think of it as training for when/if he finds a magic lantern and makes a wish to the genie.

Ah, I see some GamerGaters are whining to Tor that I am being mean to them. Well, good luck with that tactic, kids.

So a few days ago, it was suggested to a faction of the hot, pathetic misogynist mess known as GamerGate that launching a boycott of Tor Books was a possible “action op” for them. This was quickly shot down, no doubt in part because the person suggesting it was Theodore Beale, and no one at this point actually gives a crap what he thinks about anything. However, last night I went on another Twitter tear on the subject of GamerGate, and I woke up this morning to a few chuckleheads bleating to Tor about what a terrible person I am, in order to, I don’t know, get Tor to talk to me sternly about having opinions on the Internet, because apparently Tor is my dad. So maybe this push to boycott Tor because of me has legs after all! Hooray!

That said, my takeaway from these furtive attempts to make me shut up about the fact that GamerGate is basically a bunch of terrible human beings being shitty to women, up to and including threatening them and publishing their personal information online in an obvious attempt to silence themis to be just a little bit sad. Not because a few of these human-shaped pieces of ambulatory refuse are trying to do it, but because they’re thinking too small about it.

I mean, seriously, boycotting just Tor Books? Why limit yourself? Sure, it’s the largest publisher of science fiction and fantasy books in North America and possibly the world, but it’s just one imprint of Tom Doherty Associates. There are several other imprints, including Forge, Starscape, Tor Teen and Seven Seas. You should boycott those, too. That’ll show me!

But even then, you’d be thinking too small. Tom Doherty Associates is itself just one appendage of the publishing giant known as Macmillan, with offices in 41 countries! It publishes thousands of books a year! What a target! You should boycott all of Macmillan. Man, I’m quaking in my boots just thinking about it. But even then, it’s small potatoes, for Macmillan is just one part of the mighty Verlagsgruppe Georg von Holtzbrinck, with annual sales in the billions of euros. Boycott it all! No doubt all of Stuttgart shall fall into a shambles at the thought.

But even then you are not done, boycotters! For you see, I am crafty and have diversified my revenue stream. I have many publishers and many people I work with. You must punish them all for having me in their midst. All of them. And not just the tiny imprint or sub-company that works with me directly. That’s what a coward would do. And are you a coward? Well, yes, probably, because the tactics of GamerGate have been astoundingly cowardly right from the start. But still! Think big, my friends. Your boycott must not just take out a few targets, it mustnuke them all from orbit. It’s the only way to be sure.

With that in mind, here are your other boycott targets:

In audio, I am published by Audible, which is owned by Amazon. Surely it is worth giving up your sweet Amazon Prime subscriptions to make Jeff Bezos shake in his chinos!

But wait! We’re still not done. Because as you may know I have TV deals! One is with FX, which is owned by the Fox Entertainment Group, which is part of 21st Century Fox (yes, it’s 21st Century Fox now. Look it up). You will need to boycott it all. Yes, even Fox News. Be strong! It’s for the cause!

Another is with Syfy and Universal Cable Productions, which is part of NBCUniversal, which is itself part of Comcast. So for this one, some of you will have to give up cable, and possibly your Internet connection. Keep your eye on the prize! It will be worth it!

My third TV deal is with Legendary TV, which is part of Legendary Pictures. And you’re thinking, whew, at least they aren’t part of a multinational corporation! True, but they make films that are distributed through a number of film studios, including Warner Bros (basically, all the DC Comics movies) and Universal. They also own both Geek & Sundry and Nerdist Industries. Noooooo! You can’t get your nerd on anymore! Stay focused! Your pain will make victory that much sweeter!

So, in short, in order to effectively punish my business partners for me having thoughts you don’t like, all you need to do is boycott three of the five major US publishers, two of the five major film/television studios (plus selected product of one of the other ones), and the largest single online retailer in the world. Which, well. It will keep you busy, at least.

Which, to be clear, I am fine with. While you are off whining to these corporations about me, perhaps you will be too busy to, you know, threaten death, rape and assault against women who also dare to express thoughts you don’t like. And you know what? I think that’s a fair trade.

So please: If you’re going to boycott a company because of me, at least do it right. Do it big. There are all your targets, laid out for you. Go get ‘em! I’ll be rooting for you, kids!

And in the meantime, just remember this:

If you think threatening women is a legitimate tactic for anything, feel free to stop reading my work. I don't need you or your money.

wmorrell
reply
If all the gamergate flying howler monkeys self-isolate, I cannot decide if the good -- of not having to filter out their excrement -- would outweigh the inevitable echo chamber, that will make a lot of them go out and maim/kill all those "ebil fems" trying to take away their toys.

sfrazer
It's already a huge echo chamber. No one who values their time goes into /r/KotakuInAction or 8Chan/gg/ in order to sway opinion. The scariest stuff is reading the tweets of the useful idiots they've managed to snare that are actually convinced it wasn't a #gg person who doxxed Day. It was DEFINITELY a false flag action by SJWs. :rolleyes:

Take a 1-minute trip from heart-wrenching to heartwarming…

This impromptu Robin Williams memorial at a Boston park bench will move you to tears by Abraham
Sunday August 17th, 2014 at 2:25 PM

During the filming of Good Will Hunting, onlookers in The Boston Public Garden were asked to kindly not look into the camera, but other than that, just go on about their business. As passersby complied, Robin Williams and Matt Damon sat down on a park bench and filmed one of the movie’s best scenes…

Now, in the wake of Williams’ tragic passing, Bostonian fans are thronging to the bench as a place to remember him. It started with solo fans simply visiting the site to think…

Then one creative mourner added this simple tribute, quoting the classic movie…

Then a third addition…

The original contributors each left the chalk behind, and soon the jotted remembrances began to spread…

As the spot is becoming more iconic by the minute, some are suggesting and even petitioning that a bronze statue of Williams take one of the seats on the bench, so he can be remembered in one of his greatest roles, at one of his most memorable locations far into the future.

Swiss band adorably shocked mid-song when audience sings along at their first show in the U.S. by Abraham
Wednesday July 9th, 2014 at 3:34 PM

When the Swiss-German girl duo called Boy played their hit song “Little Numbers” at New York’s Union Hall last year, they couldn’t have predicted the response. It was the band’s first show in America, and the crowd sang along with both the chorus and bridge.

The singer’s response was charmingly priceless…